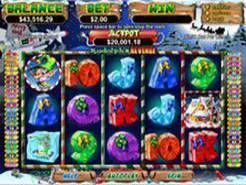 Play Now
They say that revenge is a dish best served cold. Well its very cold in the north pole, and there is plenty of revenge to be dished out with “Rudolph's Revenge Slots,” where Rudolph, the angry, red nosed, reindeer, looks to settle the score with his arch rival, Santa Claus.

This holiday themed game is developed by none other than Real Time Gaming. While the holidays is supposed to be festive and jolly, that couldn't be further than the truth in the north pole, which has broken out in a complete civil war. Elves and Santa's helpers have all chosen sides, but the mission for online players is to invade Santa's workshop, running rough shot over the elves who stand in your way, to settle the score, and along the way, picking up a lot of cash and prizes. This unholy jolly Christmas, theme game starts with at least four cents. All in all, there are 50 pay lines in this 5 reel game. A staple of any Real Time Gaming product allows players to place their bets themselves or have them placed for them in auto play mode. During regular game play, the total jackpot is $20,000, but there is a progressive jackpot that can be won at any time. On the beautifully, Christmas, decorated screen, players can not only keep tabs on the increasing jackpot, but keep tabs on the amounts that they have won, lines wagered as they stake out revenge. There is also a help button to remind players of game rules, along with a menu button to adjust the game settings and all the bright Christmas lights. Press the cashier button to instantly begin the withdrawal process.

None other than the angry Rudolph represents the wild symbol. Rudolph replaces the other symbols with the exception of the scatter, symbolized by the present concealing a bomb. The wild symbol increases winning combinations, and five Rudolphs will deliver the progressive jackpot. It takes at least three bomb presents to enter the free spins round, where players are given seven free spins. Another way to enter the free spins round with four scatters, then both Rudolph and the present bomb will both serve as wilds. Even better, if players land five scatter symbols, then not only does Rudolph, and bomb present serve as the wild, but so does Santa. The normal multiplier in the free round is 2. The other symbols include a gagged elf, a snowy house, an elf, frozen in ice, tens, nines, aces, kings, queens and jacks are adorned in lovely, colorful, Christmas wrapping. “Rudolph's Revenge Slots” can be played at most online casinos.
Play Now