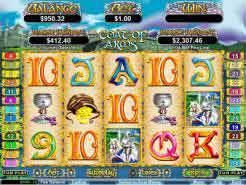 Who says chivalry dead? Well not when it comes to “Coat Of Arms” a slot title developed by Real Time Gaming that brings all the honor and valor of medieval times to the online casinos.

About Coat Of Arms

“Coat Of Arms” is a 5 reel title with 25 pay lines where courage and fortitude is needed to lead the knights to victory and conquest of the reels. As the name suggests, “Coat Of Arms” is a slot with a theme dedicated to the kingdom of England in medieval times. The symbols in the game, reflect that of knights, and other icons of chivalry. In fact, the main knight featured in the game, the white knight, represents the wild symbol and will replace the other symbols, except for the scatter symbol, represented by the black knight. In fact, landing at least two of the black knights on a pay line, will start the free spins round. In this round, players are given 10 free spin of the reels, racking up prizes and cash along the way. Also in the mode, if the golden shield lands on reels 1, 2 and 3, then you will be awarded 15 free spins, and winning combinations are multiplied four times. If you should land the bonus crown on the third reel, it will act as a wild card, and if you land five on a reel, more free games are coming your way. Landing black knights during regular game play will also increase winning combinations based on the amounts landed. Courage is highly rewarded in “Coat Of Arms,” for there is a minor jackpot of $250 and a major jackpot of $1,000 during regular game play. And because knights are expected to make the ultimate sacrifice on the battlefield, its only fitting that this game features a progressive jackpot that can be won after any spin, or in this case, after any battle. Ready to put your courage to the test? Well it only takes a mere penny to strap on your virtual battle armor, and the maximum bet on a pay line is five dollars. The maximum bet per spin is $125. Players can take fate in their own hands by placing bets manually, or have them set up in a sequence through auto play. There are arrows to assist players in setting up bets. There is also a menu button to help adjust game settings, so you'll be fully ready for the battles at hand. “Coat Of Arms” is fully optimized to be played instantly online or downloaded to computers or mobile, smart devices.