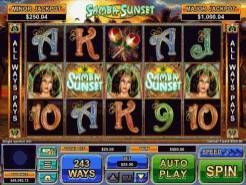 This title takes place in the legendary city of Rio De Janeiro. Feel the groove as you spin the reels to score cash and prizes. All the symbols reflect the Brazilian Samba theme. The wild symbol is represented by the samba sunset logo. When it lands, it will replace all the other symbols except for the scatter symbol when it lands on the second and fourth reels. The wild will also double winning combinations. The wild symbol is the water sunset icon. Landing three of this icon, will commence the free spins round where you are given 10 free spins. In the free spins round, additional wilds are provided to help double winning combinations. And if you land three more scatter icons during free spins, players will be awarded 5 super free spins. At the onset, beautiful samba dancers will shake their stuff across the screen, and if you manage to land a wild during the super games, winning combinations will be tripled. The other symbols in “Samba Sunset” are the playing card numbers, nines, tens, jacks, kings, queens and aces. Five of the blue aces along with 5 red kings provides a 200 times multiplier. Five purple queens or four blue jacks are good for a 125 times multiplier. Not to be overlooked is the 100 times multiplier provided that you land five of the scatter symbol on the pay line. The two lovely samba dancers are the highest paying symbols. Five of either one of these lovelies are good for a 500 times winning multiplier. General wins are determined from the left of the reel to the right, except for the scatter and the wild symbol that will impact wins wherever they land on the reels. “Samba Sunset,” also comes with a progressive jackpot that can be won after any groove of the reels. If you’re feeling the groove then all it takes is a penny to get the reels shaking in “Samba Sunset.” Players can place bets themselves or have them setup in a sequence through auto play mode. “Samba Sunset” can be played instantly online or for download at several online casinos.