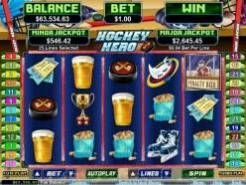 Play Now
Hockey is known as the coolest game in the world, and that reputation is put to the test with “Hockey Hero Slots.” Developed by Real Time Gaming, “Hockey Hero,” is a 5 reel video slot with 25 challenging and intense pay lines. The action takes place on center ice in a hockey rink. The goal is to score your way to prizes and cash.

All the symbols in this title reflect that of the game of hockey. The wild symbol is represented by the hockey player. This wild symbol will land only on the second and fourth reels, and it will replace all other symbols except for the scatter symbol. The hockey player automatically doubles winning combinations when it does land.
Part of the lore of hockey is the fighting. And as a punishment, players get sent to the penalty box, thus its fitting that the penalty box represents the scatter symbol. Landing three of these not only dramatically increases the winning multiplier, but it is also key to triggering the free spins feature. During the free spins mode, players take penalty shots. A unique twist to this bonus round includes all the penalty icons being removed from the pay reels with a countdown timer appearing on the first reel. The goal is to score with the purpose of landing an additional clock. If you don’t attain a 10 times winning multiplier before 18 spins, then the win win bonus round will commence where you can earn additional prizes.
The other symbols include the goalie mask, a cup of beer, a pair of skates, the goalie, tickets, a team logo, a referee and a puck. The team logo is a high paying logo. Landing five of this symbol nets in 10,000 coins. If you should land four along with a wild symbol, then that amount doubles to 20,000 coins. Landing five of the goalie on a pay line is good for 5,000 coins. That amount can double to 10,000 coins if you land a wild symbol along with four of the goalie. Five referees awards 2,500 coins.
If you ready to strap on your skates, then all you need is a penny to get the reels spinning. Guide the puck yourself by placing bets manually or have them setup and play out through auto play mode. “Hockey Hero Slots” can be played instantly online or downloaded either on your computer or mobile devices, at several online casinos.