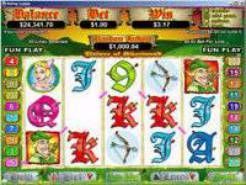 Play Now
The spirit of Robin Hood is alive and well in the form of lucrative prizes and cash, thanks to Real Time Gaming’s Prince Of Sherwood Slots.

About Prince Of Sherwood

This video slot title comes in 5 reels with 20 pay lines. As the name suggests, this is a Robin Hood style tale, set in the medieval forest. Instead of stealing from the rich and giving to the poor, players are invited to helping themselves to the cash and prizes of this slot. The wild symbol is represented by Mr. Robin Hood himself. He will only land on the first and fifth reels, and when he does land, he will replace all the other game symbols with the exception of the scatter symbols, and he will also double winning combinations.

The bonus symbol consists of the archery board. This bulls eye is the key to triggering the bonus round where you select among two archers. They will both aim and fire their arrows at a prize which can be a winning multiplier up to 100 times. If your chosen archer hits the highest prize, you will then be escorted to the second bonus round which consists of the free spins. The archer again will shoot his arrow at another target which can offer free spins of up to 25 times along with a second arrow to determine the winning multiplier which can reach up to 6 times. It is important to note that the free spins round can not be re-triggered while playing this bonus round.

The other game symbols include the knight, Maid Marian, gold coins, a bow and arrow, along with the playing card numbers, aces, kings, queens, jacks, tens and nines. The scatter symbol is represented by the castle. The knight constitutes the highest paying symbol in Prince of Sherwood. If five of him lands on the reels, then 2,500 coins will jingle your way. This amount can double to 5,000 coins if you land four of the knights along with a Robin Hood wild icon. Maid Marian pays very nicely as well with 1,2500 coins provided that you land five of her on the reels. Wins during regular game play are determined from the left of the reel to the right by aligning three of a kind of any icon. Players have the option of placing bets themselves or have them setup in a sequence through auto play mode.

If you are ready to fight for the right of good, then all you need is a penny to get the reels spinning in Prince of Sherwood slots, developed by Real Time Gaming. It is also important to note that there is a progressive jackpot that can be won after any spin of the reels.
Play Now