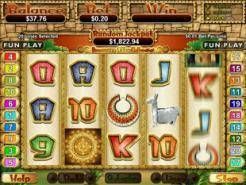 The ancient Inca civilization has been the subject of many films and archaeology research. Only “Incan Goddess Slots” takes players inside the fabled kingdom of Cusco, in search of your own treasure in the form of prizes and cash.

Developed by Real Time Gaming, “Incan Goddess Slots,” is a 5 reel video slot with 20 pay lines, where players are personally guided into this legendary city by a beautiful Incan Goddess. The game screen and the symbols all reflect this powerful civilization with the reels being carved out of pure gold. The wild symbol in this game is the Incan Goddess herself. When this symbol lands, she will replace all the other symbols with the exception of the scatter symbol, and when she does land, she will double winning combinations.
The scatter symbol consists of the pyramid. Land three of these on a pay line and you will be rewarded with 12 free spins. And while playing in the free spins round, all your winnings will be doubled, and if you should land the wild symbol, then wins will be quadrupled. There is also a chance of amassing additional free spins while in this round. Other symbols in this game includes, a wooden vase, an animal relic, the temple, a wooden vase, the sun symbol, along with the playing card numbers, nine, ten, jacks, kings, queens, and aces.
If you manage to land five of a kind of any symbol, then the double or something bonus round commences. In this round, you must pick between a black and red button. Choose correctly and your winnings will be doubled, choose wrong, however, and you won’t lose the winnings you entered the round with. The Incan Goddess is the game’s highest paying symbol. Landing five of her on a pay line nets you 5,000 coins. The sun symbol is the second highest symbol. Landing five of these results in 2,500 coins.
If you’re ready to take a virtual, but highly rewarding journey to the ancient, Inca kingdom, then all it takes is a penny. The maximum bet per historical spin, is $100. “Incan Goddess” also features a progressive jackpot that be won at complete random. Players can place bets themselves, or have them setup in a sequence through auto play mode. “Incan Goddess” can be enjoyed at several online casinos, and can be played on your computer, or right in the palm of your hand with today’s smart devices.