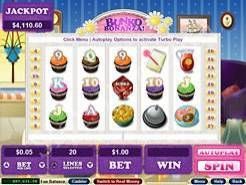 Developed by Real Time Gaming, “Bunko Bonanza” is a unique slot game based on the English game, Bunko where players roll three dice, only in this exciting slot version, the rolling of the dice, spins the 5 reels with 20 pay lines. The graphics are crisp and animated, with pink and purple serving as the theme colors. The background and the symbols reflect that of a party or a birthday celebration, complete streamers and ribbons. Speaking of symbols, “Bunko Bonanza” features bells, Bunko dice, cupcakes with the playing cards, nines, tens, jacks, queens, kings, and aces, a pitcher of juice, a bowl of potato chips, a plate of donuts. The Bunko dice represents the scatter symbol. Land three or more on a pay line to commence the free games round where players get 21 free games, and winning combinations are multiplied anywhere from two times to six times, depending on the roll of the dice. Also in the free spins round, landing the bell, which represents the wild symbol means that winning combinations can be multiplied as much as twelve times. As just mentioned, the bell represents the wild symbol. It will replace the other symbols except for the scatter symbol during regular game play. Landing the bell icon means that winning combinations are doubled. The regular game play jackpot is 2000 coins, but there is an ever growing progressive jackpot ready to be won after any spin. Who knows, maybe you're just a shot away. The minimum bet to get into this virtual party is a penny. The maximum bet placed per pay line is five dollars. The maximum bet per spin is $100. Players have the option of either placing bets themselves, or having them set up in a sequence through auto play. To assist players, there are lines to set up bets. There is a menu button to adjust game settings, and there is a help button to go over games rules. And of course, there is a counter that's keeping track of the ever increasing progressive jackpot. “Bunko Bonanza” Slots is available at many online casinos, and it is fully optimized for both desktop and mobile smart device users.
Play Now